Storm Clouds Gather Over The White Cliffs of Dover 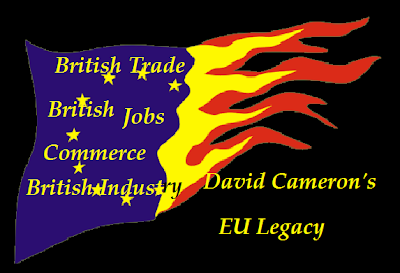 David Cameron had travelled to Brussels to hold meetings with other EU countries to try and thrash out a deal to help stave off the crisis which threatens the euro currency with collapse.  Cameron returned home jubilant, so jubilant, one would think he had help stop the threat to millions of British jobs which are at risk if the euro collapses, however, this wasn’t the case, what he had done was to attend that meeting and make a set of demands he knew could not be met, misused the UK’s veto and walked away from the talks not helping to settle anything and thus effectively rendering the UK completely isolated and totally impotent.

It cannot and should not be denied that Cameron was in a difficult situation, but I do not feel empathy for him, he wanted to be Prime Minister and being PM means a lot more than swanning around lapping up plaudits for other people’s efforts, it means being able to make and take tough decisions and calls when they arise and the hardest thing and the right thing for Cameron to have done  last Friday would have been to face down his right wing Eurosceptics and stayed with the other EU leaders and try to thrash out a deal to save the euro and reach a decent compromise for Britain, instead of doing this he placed his own narrow party interests and the interests of his hedge bet funding mates, venture capitalists and Tory fat-cat donors before the good of the country, this will turn out to be a catastrophic decision for the country and the beginning of the end for David Cameron’s premiership.  What Cameron did last Friday made him the toast of the rabid right wing Eurosceptics of his party and no doubt he was also heralded by his bonus loving banker chums and private equity sharks. However, for the leaders of British industry, exporters, manufacturers and commerce and long-term investors of pension funds etc., what Cameron did was absolutely shocking and appalling. This was proved by the reaction of the markets last Friday and will probably be seen again when they open on Monday morning. The irony of this is that at the last election all these groups heralded David Cameron and George Osborne as their men – how quickly they are now discovering otherwise.

France and Germany will now use QMV (qualified majority voting) to push through decisions that will affect us and our lives and we will not be at that table to stop them. So Cameron saying he done this to protect the City is nonsense, they will be affected anyway. Cameron has cut the UK adrift from our trading partners, our allies and our friends and once again the whole of Europe is looking at us as if we have a screw loose. We will become known as the “madman of Europe”. What Cameron has done is profoundly damaging and deeply dangerous to our whole way of life; the very thing that Cameron pretends he wants to “protect” will end up being irreparably damaged and unless he goes back to the EU and tries to repair some of the damage he has caused, the people that will suffer for his ridiculous pompous blindly stupid arrogance is us ordinary people.

The threat to jobs is not just in the City, but to millions all over the country, the risk is tremendous and it has been brought about by David Cameron’s fear of his party and his arrogant feckless, reckless behaviour last Friday, where he managed to undo 40 years work in just a few hours in one night.

Cameron went in there demanding concessions which he could not have accepted anyway as he had no authority to accept them they would have had to be voted on in parliament before that could happen, so in effect Cameron has placed us all in this situation for precisely nothing but his own over inflated ego and his own selfish party political interests. He did what he did to appease the right wing of his party because he was scared if he did not then they would dispose of him. Some sobering news for Cameron, Margaret Thatcher once famously said after negotiations with the EU “No – No – No”.  Margaret Thatcher was gone just five weeks later, ousted out by her own party!

I predict this is the start of the end for Cameron. The rabid right of the Conservative party are not going to allow him to go back to the EU and re-negotiate properly; very shortly they will be calling for a referendum.

Make no mistake, now the rabid right wing Tories have tasted blood, they will be satisfied with nothing else but our exit from the EU, and that's an exit at any price! The cost however, will not be paid by them, they are nearly all millionaires, no the cost will be borne by the already hard hit and squeezed ordinary folk of this country, the same people who are already buckling under the strain of Osborne and Cameron’s insane austerity measures who are forcing us to pay for the their greedy banker friends, the very people who got this country and the world into this mess in the first place and unbelievably those are the very same people who donate millions of pounds to the Tory party.

All Cameron has done is bought himself some time but that time is fast turning into just the briefest of respites.  The call for a referendum will start in earnest this coming week it will emanate from the Tory right and this will without doubt reopen all the old divisions between Eurosceptics and pro Europeans within the party and place considerable strain on the coalition government.  In effect, in abject fear of his own party Cameron himself has reopened the running sore and tracking sinus that has lain dormant just under the surface for a few years which will now erupt like a pox on the lips for all to see. Open warfare between pro and anti-Europeans will once again be declared and the longer this continues the more harm it will do to the Tories and more importantly the more it will harm this country.

Conservative pro Europeans have been strangely quiet, almost like an uneasy hush has descended over them as if they cannot quite believe what Cameron has done and what it will now mean to the Conservative party as a whole. Up until now it has been the sceptics that have all been clapping, banging their drums and shouting and whooping with joy and positively salivating as they quickly turned the talk from this one act of Cameron using the veto to one of our complete exit from the EU. By now as reality starts to bite the simmering resentment will be brewing. Once again the Tory party is split asunder.

David Cameron may like to believe himself the all-encompassing statesman of Churchllian nature, the good old “British Bulldog spirit” and all that kind of talk usually favoured by right wing zealots and the BNP, but in reality he is a complete joke. Churchill would never have "growled" at our friends and allies; Churchill would never have put this country at serious and unnecessary risk. People should remember the people that Cameron upset are not our enemies, they are our key trading partners, they are our friends and allies.

Britain does not have a proper government that much has become increasingly obvious over the past 19 months but now it is obviously we are being led by farcical egotists and the rest of the world (not just Europe) now looked upon as a joke and a laughing stock. We are a country that thinks still thinks in terms of the British Raj and British Imperialism, we are a country that appears totally unable to accept the demise of the British Empire, a country that cannot accept that we do not “Rule the Waves” because actually we never did. Britain is an enigma to true Europeans; they must scratch their heads in complete bafflement at our ridiculous childish xenophobic anti-European behaviour. If there was ever a time to use the old adage of "cut off our noses to spite our face" it is right now.

The British Prime Minister is not leading his party or the country he is just following the right wing of his party up a very dark and dead end ally. The reason he is doing this is because he is desperately afraid of it.

We also have a deputy PM, who for the life of him cannot make a decision as to where he stands on this entire issue. One minute he is giving Cameron his backing, the next he is saying he is furious with Cameron, and then the next he has gone back to his original position. Clegg is going round and round in those proverbial circles when really the decision where to stand on this particular issue of the EU and the euro should have been a simple one for Clegg, after all everyone knows and accepts his pro-European credentials, they may not agree with him, or like them very much, but we all presumably knew where he stood and he could have been respected for that at least.  However, now we can only assume that just like tuition fees, human rights and the destruction and privatisation of the NHS before, when push comes to actual shove Nick Clegg has once again acted to protect his own narrow interests of staying in government and clinging on for dear life to any remaining vestige of any power he may have thought he had in this very right wing, very Conservative government. Quite where this will leave him should he lose his Sheffield Hallam seat at the next election is unclear; one suspects that he has now scuppered his own chances of ever being anything significant in the EU after the next election. He may think he has saved the Liberal Democrats from a beating at the ballot box by preventing the coalition breaking up now, but he should not hold his breath because the chances of this coalition breaking up early have just increased a 100 fold, regardless of what Nick Clegg has done, or not done. In fact he has probably increased the thrashing his party will receive at the next election as confused Liberal Democrats view with absolute horror how their indecisive, ineffectual leader is behaving.

Meanwhile David Cameron is not standing on the White Cliffs of Dover in of defence of this nation; he is standing there wondering if he should throw himself off now or later!
Posted by Gracie Samuels at 12:43:00 PM