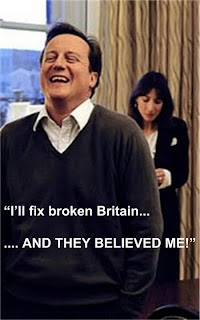 Last Tuesday Ed Miliband delivered his second speech to the Labour party conference since he became leader of the opposition and days later the speech was still being debated on TV, radio and the press, whatever you may think of Ed Miliband this has to be considered a success, he wanted to start a debate off and this is exactly what he has done.

He has been pilloried in the right wing press because he has dared to signal he is prepared to take on the bankers, the asset strippers and the hedge funders to bring about much needed change to the way this country does business.


Labour is the only real party of opposition, certainly the only party who stands a chance of ousting Cameron from number 10, we cannot depend on the Liberal Democrats who sold their granny for a shot of power and now find themselves stuck to a deviant Tory party hell bent on destroying the NHS, education, and the welfare state.

David Cameron is behaving like a megalomaniac on speed. His behaviour is becoming increasingly bizarre, yet no one in his party is either prepared or capable of stopping him. He is riding roughshod over parliamentary democracy and constitution and is now trying to take away workers rights in the work place and also human rights.

For all those people who work in the private sector and were used by David Cameron as his personal "attack dogs", fired up and then set loose on the public sector over pay and pensions and redundancies, remember this Tory party conference, because this is where the rights of the private sector workers will start  to be eroded too. You have been used and you have been warned.

Yesterday it was public sector workers, today it is you and your rights, and you and your children's futures hanging in the balance.   Cameron has already started his attack on pensioners, Disabled people, the young, the sick and the vulnerable and now today we learn that Cameron is to start attacking the unemployed, he is going to cut the allowance of those still attending job clubs if they do not get a job after six months, yet there are NO jobs to be had and it is this Tory government who have pushed up unemployment which is now threatening to spiral out of control.

Who or what will it be tomorrow?

The only reason that David Cameron and George Osborne can do what they are doing to British society is because of Nick Clegg and the Liberal Democrats, they are an abomination and a blot on the history of our country for enabling this most right wing of Tory governments impose their right wing ideology upon us. An ideology that will see the ruination of hundreds of thousands of jobs and public services, push hundreds of thousands out of their homes and on to the streets, a privatised NHS, a two tier education system, fewer police, doctors, nurses, teachers and our country's defence left weak and unable to protect us, especially against terrorist attacks.

If the Liberal democrats had a spine they would walk away from this Tory government that is growing more repugnant with each passing day, they would force it to govern as a minority government and then take part in a vote of no confidence to help remove this evil Tory scourge from our country before it can harm anyone else, but alas the Liberal Democrats have no spine they are "weak...weak...weak" and they have truly shown they can never be trusted in government.