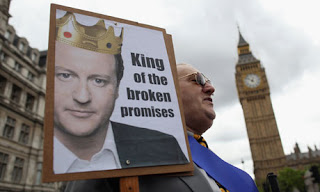 The past week we have had a so-called serious newspaper the Telegraph, better known of course as the "Torygraph" publishing so-called information from letters stolen from the Shadow Chancellor, Ed Balls belongings. The real story is not in the old information they are publishing as you would have had to live on Mars not to be aware of the "fractious" relationship between Blair and Brown in 2005, the real story is in who actually stole these papers and leaked them and why leak them now?
Background:

After labour lost the 2010 general election, former Education Secretary, Ed Balls personal papers and belongings were packed up ready to be sent from his old office at the Department of Education to his new office in the House of Commons. This is the last time Mr Balls says he saw those papers.  It is fair to assume that the incoming education secretary, Michael Gove, would be occupying the same desk and office as his predecessor, so those papers would still have been among the personal belongings waiting to be taken to the Commons when Michael Gove took possession of his new office. There is no polite way of saying this, but what happened next appears to be that "someone" actually went through Ed Balls personal belongings and removed those letters and documents and then withheld them until an appropriate time arrived to reveal them. This matter is now being investigated by the Cabinet Secretary, Gus O'Donnell, who is holding an internal inquiry, I have my doubts as to how "independent" of the sitting Tory government this inquiry will be, but before I comment on the "independence" of that I will await the result of that inquiry.

Just over a year later and somehow these documents landed up in the hands of the editor at the Telegraph. Forgetting for a moment that the information they contained is ancient 6 year old history and has not revealed anything that people did not already know, those documents were actually stolen and they were handed to the Telegraph as a result of "theft" and I believe the Telegraph broke the law in handling them and then publishing from them, not least because the documents actually belonged to Ed Balls and one must assume he holds the copyright to them, the Telegraph certainly doesn't and neither does the person who originally stole the documents. As well as the "inquiry" now being held, complaints should also be made to the police and the Parliamentary Standards Commission, because someone broke the law and stole those documents and has then either used them for political gain or financial gain, or both and the Telegraph should be forced to reveal who gave them the documents and if money changed hands, exactly how much and if the Telegraph will not reveal this information then they should be forced to reveal it in a court of law. Whereby the information the Telegraph published turns out to be just the machinations of government ministers planning for the transition of one prime minister to the next, (as one would expect then to do) but that has not stopped the telegraph and the Mail from going completely overboard and totally sensationalising this non-story and the Times even attributed a quote to Lord Prescott that he did not make, totally and purposefully misrepresenting the whole issue, Prescott has demanded an full front page apology in the Times and we all know they deliberately misquoted him as he did not enter any conversation with the journalist at all. That aside, the fact remains that the documents were stolen and theft like this at this level in government cannot, and should not, be tolerated, it is a matter of trust, and trust in politics and politicians is at an all time low, this was not "whistle blowing" it was common theft.

Either the Telegraph "purchased" these papers last year, or they were purchased or handed to them now, either way, whoever held them has held onto them for a year to be used at a time the holder could either get the "best price or" cause the most political damage, which implies a level of underhand scheming. to get a better idea let's take a look at what happened on the political front last week.

Saturday 4th June - This story appeared in the Guardian newspaper  Is Osborne Losing his grip On the Economy?

Sunday 5th June - The Observer newspaper published a letter from 52 economists detailing why they believe "The Coalitions Spending Plans Simply Don't add Up" claiming that the chancellor's plans were damaging growth and calling on the government and George Osborne to halt the pace and depth of government cuts to allow the fragile UK economy time to recover properly before imposing further austerity measures. Among those economists and professors were economists who had previously backed the chancellor's austerity measures. This was incredibly damaging for George Osborne and the Conservative government.

Monday 6th June - Newly released Retails Sales Figures were shown to be down by 2.1%

Friday 10th June - Dire day for the economy to confound a week of bad news.
As you can see this was not a good week for the Tories, the economy is showing real signs of slipping back into a double dip recession, the Tories were taking a pounding on the NHS, policing and the crime and the judiciary and their welfare bill was announced and quickly forgotten by everyone. They were making the news headlines., but not in a good way, so they badly needed something to spin people's attention away fro the Tory failures, where failure is now becoming synonymous with this Tory government.

The low and behold as if by magic someone delivered these papers to the Telegraph, well we can assume that it wasn't "puff the magic dragon", these leaks have undoubtedly come from Michael Gove, or his office or Tory high command, the reason being to divert attention away from the truly awful mess that George Osborne is creating. This will in the end turn ferociously on the Tories because just like their dreadful ill-thought out reforms in the economy, the NHS, welfare, the police, education and the judiciary not enough thought has gone into trying to understand what will happen beyond the leaks!

Next week we will have the new set of unemployment figures who knows what they will contain, whatever they are this economy is in a horrendous state and it is entirely of George Osborne's making, don't forget he was handed an economy in growth which was steadily increasing and consumer confidence good, all the attributes Labour handed over which the chancellor, George Osborne promptly ruined.

This comes at a time when Ed Balls has been found to be 100% correct on the economy and Osborne the Tory chancellor is found seriously wanting. The Tories may have through dirty tricks projected labour into the news, however, ordinary person on the street may just want to take a closer look at Ed Miliband to see what all the fuss is about and all of us who know Ed, will realise that he stands up very well to scrutiny, he is honest, calm, dignified, highly intelligent, more like a prime minister than the arrogant lying bully David Cameron and certainly more statesmanlike, this whole business looks as though it could play very nicely for Ed Miliband and Labour and give him the publicity he needs, giving credence to the saying that "there is no such thing as bad publicity".

The odd thing is that the Telegraph has been acting in a bizarre fashion almost going apoplectic over a really old non-news story, really looks completely out of context and their comments section is going way down market too! While the right wing press have virtual orgasms over this non-story which is six years old and the political pundits all line up to say their pieces to camera on College Green, ordinary people will be going about their lives and taking next to no notice of this, which let's face it only made it into the press in the first place because the Tories needed a diversion and they will be praying that if next week's economic news is just as bad, or even worse, and that their much touted "un-paused" paused NHS reforms fail to pick up support, that they have not shot their bolt too early in going public with their "stolen" documents when they did, perhaps they are having internal arguments on top of the splits and divides and fragments that makes up this Tory Led government about this right now? On top of their extremely bad private polling figures and I have it on good authority that Cameron is extremely worried and agitated about something, I wonder what that could be? Rebekah Brooks oops who said that?

This whole farce is exactly the kind of thing the right wing press did to Gordon Brown and now they are trying to do exactly the same with Ed Miliband.

Let's not forget either that as the Telegraph published from "stolen" documents and if the Tories are found to have passed those stolen documents over to the Telegraph, then this could end up in the hands of the police.

Another three words for the Tories: Cheats ... never ... prosper!

Well said Nicky, I am quite content to let the "silliness" run its course, at the end of the day the general public are not interested in the twists political journalists get their knickers into over such things, bizarrely, I spoke to one old lady yesterday who had watced the Miliband speech because of all the hoo ha in her paper and found she was very impressed with that "nice polite young man", that made me smile 1) because I predicted as much could happen and 2) I would just have loved to see the look on the Telegraph editor's face listneing to that, it is the complete opposite of what they want people to think. I know it is only one person but hey, she's pretty representative of her little club. People that play dirty tricks, steal and lie like the Tories and the Telegraph have done, will have to pay the price at some point.