Is Another Tory Recession Coming? 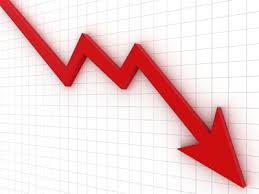 Hold on because it looks like things are going to get very very bumpy and this time there is no 'big clunking fist to steady the tiller"!

There has been a slow down in Construction, the housing market, the car industry and manufacturing in general. These are all serious barometers which can predict the future of the UK economy.  The country cannot live on the service sector alone as we are about to discover!

An interest rate rise is teetering on the brink and was only saved from a rise this time because of falling oil prices. The reason why when asked, the Chancellor Phillip Hammond was very reluctant to crow about it, is because RPI (including housing) and used by pay negotiators is 3.5%, signifying a nasty cut in the value of wages and living standards.(Again another time the Tory supporting press is keeping quiet, where previously this would have made headline news!)
Rising numbers of people are once again living on the personal debt of credit cards and loans (a trend that was seen previous to the 2008 crash) but they are not buying fancy goods, many are using their credit cards as bridging loans to get them from payday to payday to pay rent, rates and mortgages etc! Is this the start of the Brexit Bite or an indication that another financial crash is heading our way, or both? The gap between consumer debt, flat-lining pay and low pay is widening - up 10 percent in just the last year alone.
Leading economists are asking if the widening gap is the start of another credit crunch and financial crash,

There are also serious doubts about the real levels of unemployment that are now so low that the figures are in danger of exposing the level of lies and disinformation this government are operating in.  The figures show unemployment levels at 4.5% levels we haven't seen since early 1970, truly remarkable, yet the right-wing Tory supporting press never backwards in going overboard and OTT to support their party have hardly whimpered about it, where is the huge splash across the front page and inside pages telling us how great everything is? Even stranger is we are in 'silly season' the papers are all looking for something to report but they have hardly mentioned this 'astonishing achievement' - why?  To say that Tory Chancellor Phillip Hammond was reticent to talk about this 'achievement' is putting it mildly - why? Tory MPs who are known to be able to crow for England are strangely silent - why?  If you go back into the history of this blog you will see that I have been pointing out that the unemployment figures are artificially low for years and explaining why I believed this. Are the levels of unemployment now so low that they are in danger of busting the Tory lie that is unemployment wide open?  Here Jim Edwards of the Business Insider explains why he believes "Unemployment in the UK is now so low it's in danger of exposing the lie used to create the numbers."
Mr Edwards believes that unemployment is 3 or 4 times higher than the official figures, here he attempts to unpick the gobbledegook from the Office National Statistics (ONS) that usually goes right over normal people's heads (including mine).

The official unemployment rate in the UK right now is 4.5% — a record low. But, as the ONS makes clear, that number doesn't count part-time workers who want full-time jobs, "inactive" workers alienated from the workforce, people who retire, students, or those who work in the home. Once you wrap all those people in, the number of jobless people is actually 21.5% of the workforce, according to the ONS.


The true level of unemployment Even now the ONS is not counting those forced onto government workfare contracts (who are unwaged) and those who are sanctioned by Jobcentres for a whole myriad of reasons, I have long argued that the ONS should be allowed to include these figures but they can't because they are not given the figures by the Government, so the Government are purposefully withholding statistics they know could drastically alter the official number of unemployed. The ONS also does not include those claimants that Jobcentre's forced into self-employment who are not idle because they do not want to work but are idle because there is NO work for them to take, they are waiting for the phone to ring. These people are often experiencing weeks between jobs, yet are unable to claim unemployment benefit and thus are not included in the official statistics.

The economic outlook for the next few years as we go into Brexit is looking decidedly unsettled and the Conservative Government is complacent, it's doing nothing to offset the looming financial problems, they are all too busy fighting each other and planning leadership bids and the prime minister Theresa May is weak and has no authority over her cabinet ministers and has even had to resort to calling an extraordinary cabinet meeting to attempt to assert her authority with the 1922 Committee being forced to back her by giving her authority to sack errant ministers, this comes after weeks of open squabbling and damaging internal leaks. Former PM David Cameron called the EU referendum purely to get him out of a political fix from his right-wingers when he lost the referendum he ran away before he could be blamed for the carnage. Mrs May then became PM, she held a snap election despite saying five times she wouldn't and lost her majority and has caused absolute chaos in the country and this will only get worse. we are about to tread unknown territory with a recession coupled with Brexit. This is seriously bad news and it is entirely of the Conservative government's making. Not one of the government's Brexit team seems to know what they are doing, all they have done so far is alienate the countries we need onside for our own financial good. The Tories are all running about like chlorinated headless chickens!

Next time you hear the Tories and their mates in the Tory right-wing press telling us how Labour 'crashed the economy' and how it is all Labour's fault that greedy Tory bankers gambled with customers money (and lost) and gave credit out to anyone who asked for it and took part in the sub-prime mortgage fiasco that set the world up for the 2008 financial crash, ask them what the real level of unemployment is and ask them why this government are presiding over escalating borrowing, yet have absolutely nothing to show for it, ask them why seven years later they have not cleared the deficit up, the same deficit they promised to clear by 2015, yet now say they'll clear sometime never in the future.

The truth is that austerity has not only failed, it has absolutely failed. One example of this government's short sightedness is, when Iain Duncan-Smith (IDS) was Work and Pensions Secretary he was in charge of the Tiry welfare reforms, part of those reforms were targetting disabled people and bullying them back into non-existent work in non-existent jobs. IDS had a doctor devise the new Personal Independence Payment forms to deliberately make disabled people short of the points (usually just 2 points) short of the total they need to claim middle rate mobility payments which allows them to lease a 'motability' vehicle. This has resulted in thousands of seriously disabled people losing all or part of their allowance and Motability had no choice but to take back the cars from disabled people, not only has this had an effect on employment of mechanics for servicing the cars etc, it has had a direct effect on the sale of new cars, so this so-called reform has ended up not only costing the disabled person their liberty and peace of mind, it has ended up costing the taxpayer more than it has saved, it is a false economy. The only change this reform has had is that disabled people are forced to pay out of their own pockets and more often than not they just do not have the extra money so go without. This, of course, all feeds into the local economy and the national economy.

Muscular Dystrophy reports that 900 disabled people are losing their cars each week due to Tory cuts
that 's 50,000 specially adapted vehicles removed and of course, these people not only lose their car but will not be ordering a new car when their lease is up!

Our government are not protecting us and are totally clueless and because the Tories are scared of losing power they are allowing a weak, damaged ineffectual incompetent prime minister in Mrs May to limp on and the people picking the cost up will be us, the 95% and NOT the top Tory 5% high earners who will make millions out of our misery in a recession of their making!

If Labour had won the general election they would now be busy implementing their policies for big infrastructure investments, taking the railways and other utilities back into public ownership, they would be borrowing the same amount the Tories are currently borrowing but instead of lining the pockets of the right-wing establishment, they would be using the money to benefit 95% of us!

Instead, the taxpayer is being forced to cough up £1 billion to pay off the Democratic and Unionist Party (DUP) to keep this zombie government in power and this is absolutely and categorically wrong.